This article was written for "The Norfolk Nattterjack" the quarterly bulletin of the Norfolk & Norwich Naturalists' Society. It is an account of the 2010 influx of Silver-washed Fritillary butterflies into Norfolk and East Anglia plus a few thoughts on the potential for a future re-colonisation. 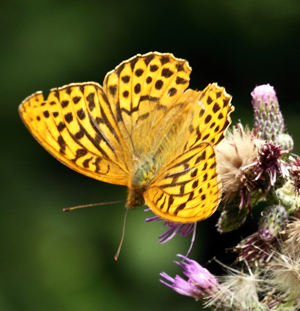 Along with other butterfly enthusiasts in the county, I was fortunate to stumble across a Norfolk Silver-washed Fritillary, Argynnis paphia, earlier in the year. In my case, I was in Foxley Wood checking out the White Admirals and hoping for a few better photographs. Whilst walking the rides, a distinctive, fast-flying, orange butterfly caught my attention, appearing bigger and paler than the resident Commas. I managed to track it to areas of thistle and bramble where it settled down to feed, providing all too brief photo opportunities. The butterfly was a male Silver-washed Fritillary, part of a pattern of sightings for the species in Norfolk and Suffolk that began on 16th July. The Norfolk butterfly recorder, Andy Brazil, has collated records for the county which amount to 23 individuals from 16 different sites. Suffolk, Essex and Cambridgeshire all witnessed increased sightings. In the case of Suffolk, 15 from a single wood on one day suggest that a small breeding colony may well be established, especially as the site has records from 2009. 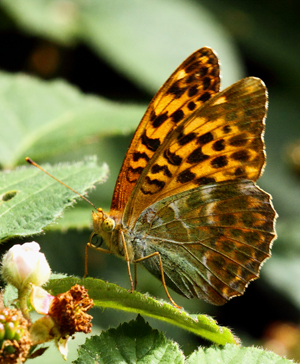 With respect to Foxley Wood, the Norfolk Wildlife Trust archives include a letter from 1968 giving clues as to the former abundance and sad decline of the Silver-washed Fritillary. Their correspondent, David Ruthven, notes that he recorded very low numbers in 1966-68 (down to only two or three individuals) and attributes this to the widespread pheasant rearing and felling. He states that 15 years previously in the 1950s they were “without exaggeration” reasonably common in the wood, sometimes 6 at a time being seen on one large clump of brambles.


The influx of small numbers of this beautiful butterfly raises hope that it may be able to establish itself once more in Norfolk. However, it does have demanding requirements, depending on Common Dog Violet in shady woodland and laying its eggs on trees, using crevices in the bark. The larvae hibernate over winter but in spring make their way to the ground where they use the violets as food. Foxley Wood has an abundance of seemingly ideal oak trees and the woodland rides have large populations of violets. Obviously it will take more than one male Silver-washed Fritillary to restore this beautiful butterfly to Norfolk's biggest ancient wood but hopefully the East Anglian influx will continue and lead to an eventual natural re-colonization.


Across its established breeding territory, the Silver-washed Fritillary has enjoyed a good year. Quoting from Andy Brazil’s report for Butterfly Conservation: “New colonies have appeared in Bedfordshire, while Sussex, Hampshire and Wiltshire report exceptional numbers.” Also, a friend from the Chilterns monitored an impressive increase in a population that recently colonized a 40 year old conifer plantation better known as the location of J. E. Lousley’s famous 1947 picnic during which he rediscovered the then “extinct” Military Orchid, Orchis militaris. The butterfly is attracted by warm, wide forestry rides with ample bramble as a nectar source and whilst oak is considered to be the tree species of choice for egg laying, here the conifers are used. This is interesting in the sense that some Norfolk sightings are from similar evergreen plantations. For example, quite a few people saw Silver-washed Fritillaries at Holt Country Park where they very obligingly fed on a buddleia bush next to the car park, seemingly untroubled by a constant passage of school holiday visitors. I watched a rather tatty male there on 11th August, which is probably one of the year’s latest records for the species in Norfolk. 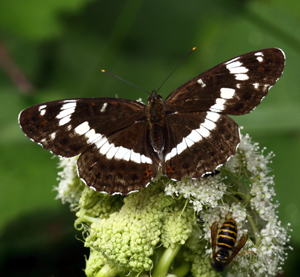 I also went back to Foxley Wood after the first sighting and on a couple of occasions encountered what I am 90% certain was a Silver-washed Fritillary flying down one of the main rides at breakneck speed. No chance of a photograph this time but a nice still bright but overcast day did help gain some better shots of the White Admirals which, with brambles getting sparse, were inclined to feed on Hogweed and Wild Angelica. The Foxley White Admirals also had an especially good 2010 with large numbers congregating on favoured “nectaring” sites and individuals apparent throughout the wood.

Having one of the biggest and most impressive of the Fritillaries share the Foxley brambles on a regular basis would be a just reward for all the hard work that the Norfolk Wildlife Trust has done to restore this important remnant of our ancient woodland. Can but hope!

Thanks to Andy Brazil, Malcolm Brownsword, Mick & Wendy Campbell and John Milton for sharing their knowledge of the Silver-washed Fritillary.
Next
Previous