Monster at the Plant Show 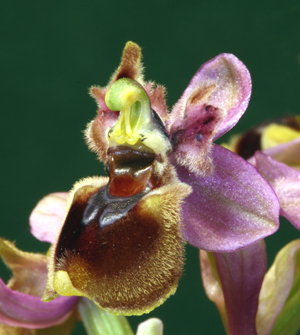 The Hardy Orchid Society organises an annual competition and exhibition of cultivated hardy orchid plants and one of my tasks as Journal Editor is to photograph the winning entries. In addition to their obvious aesthetic appeal, the 2010 Plant Show entries included a hidden gem – the presence of peloric flowers on an Ophrys tenthredinifera plant that was entered by Richard Manuel. It achieved a worthy second place but became the focus for some extra photography once all the “firsts” were captured. As shown in the accompanying images, this plant had a mix of normal (middle photo below left) and peloric flowers (photos top right and bottom right), making it an example of what has been termed “scattered peloria.” In this case the peloric flowers have three lips, and as can be seen by comparing the two photographs, the extra two are formed at the expense of the two lateral petals. This type of morphological abnormality is referred to as “Type-A peloria” (Bateman & Rudall & 2006). It is evident that the two extra “lips” are smaller and incomplete compared with the true lip. 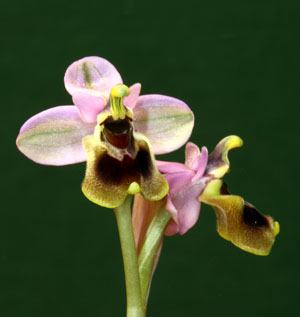 In some other examples of peloria, the abnormality involves loss of the lip and its replacement by an extra undifferentiated flower part, a third petal that has failed to develop into the characteristic lip. This phenomenon is termed “Type-B peloria”. Also, the presence of sepal-like structures in place of petals is sometimes encountered and this is termed “Type-C peloria”. (Rudall & Bateman 2003).

“Peloria”, the Greek word for “monster”, was first used by Linnaeus to describe a variant of Toadflax (Linaria vulgaris) in which its normally zygomorphic flowers had developed radial symmetry. Peloric orchid variants have been noted on numerous occasions but most frequently all flowers in an inflorescence share radially symmetrical flowers, a condition that is termed “complete peloria”. 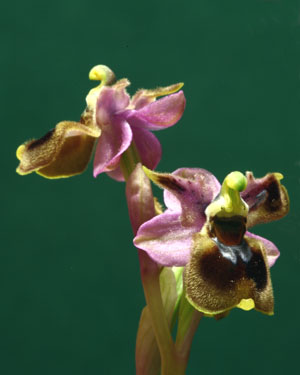 Peloric forms of our native orchids have been reported in the literature and include the late Derek Turner Ettlinger’s description of several three-lipped Lady Orchids at one of the better known Kent sites for the species (Ettlinger 1987). As well as their interest as an orchid curiosity, peloric flowers are of significant scientific interest and have attracted the attentions of several professional botanists, including the Hardy Orchid Society President, Professor Richard Bateman (e.g. Bateman 2005, Bateman & Rudall 2006, Rudall & Bateman 2003). In particular, they provide useful clues about the evolution of the complex flower structures that are typical of orchids as the regression towards a symmetrical flower provides insights into the development of their asymmetric zygomorphic flowers.

Bateman. R.M. & Rudall, P. J. (2006) The good, the bad and the ugly: using naturally occurring terata to distinguish the possible from the probable in orchid floral evolution. Aliso 22: 481-496.