A couple of years back I came across a variant Lesser Celandine with deep bronze, almost chocolate coloured leaves that were a striking contrast to those of the normal form. Apparently, such “sports” are known to crop up quite frequently in this species due to the occurrence of spontaneous mutations.
Although the Lesser Celandine Ranunculus ficaria is one of our most common flowering plants and from a gardener’s perspective merely an invasive weed, it remains one of my firm favourites. It is abundant on the roadside verges around our village and persists in patches at the edges of the garden, always flowering very early. As such, it heralds a new botanical year and seeing its first yellow flowers is always a joy. Gilbert White recounts the use of “spring messenger” as an apt name for the Lesser Celandine and whilst best known for extolling the virtues of daffodils (as in “a host of golden”!), William Wordsworth penned three poems about the species.

The Wordsworth poems capture much of the celandine’s appeal. In “The Small Celandine” he recounts the flower’s tendency to remain stubbornly closed under cloud, only opening when the sun is out:

There is a flower, the lesser celandine,
That shrinks like many more from cold & rain,
And the first moment that the sun may shine,
Bright as the sun himself, 'tis out again!

And this from “To the Small Celandine”:

Pleasures newly found are sweet
When they lie about our feet:
February last my heart
First at sight of thee was glad;

And this from “To the Same Flower”, reinforcing the view that the celandine was Wordsworth’s favorite:

Pansies, Lilies, Kingcups, Daisies,
Let them live upon their praises;
Long as there's a sun that sets
Primroses will have their glory;
Long as there are Violets,
They will have a place in story:
There's a flower that shall be mine,
'Tis the little Celandine.

A couple of years back, amongst the garden edge celandines, I came across a variant with deep bronze, almost chocolate coloured leaves that were a striking contrast to those of the normal form. Apparently, this is a frequently observed event and the species is noted for a tendency to generate such “sports” due to the occurrence of spontaneous mutations. 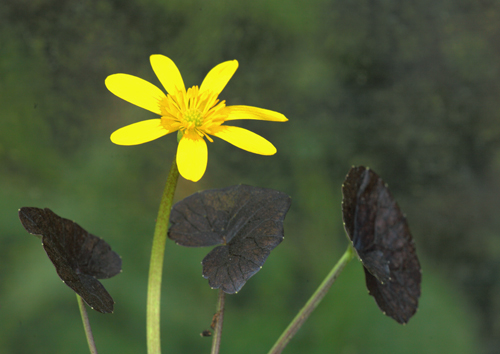 A little research on the internet and elsewhere revealed that similar variants have been observed and introduced into the world of horticulture. One of the first was found by John Rea in 1665 and was still in cultivation in 1956 when the second edition of Alice Coats’ book “Flowers and Their Histories” was published (Coats 1956). Also, the famous gardener and writer Christopher Lloyd found another growing in nut woods below his garden. This variant was introduced as the named variety “Brazen Hussy” and that one is still commercially available. The Beth Chatto catalogue (www.bethchatto.co.uk) lists it along with another chocolate-leaved form “Coppernob” that has the added attraction of orange flowers. Apparently, variant forms are less invasive than normal Lesser Celandine adding to their attraction as garden cultivars. This also means that they tend not to persist in nature, probably because they cannot compete with the more vigorous “weedy” parent plants. 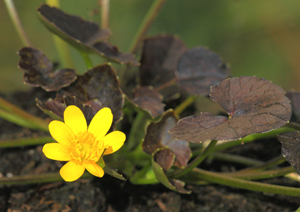 Anyway, it is probably worth giving new season celandines more than a cursory glance as there is always a chance of finding interesting forms with dark foliage or flowers in white or orange. As for my garden variant, I took the trouble to preserve it and have propagated a few captive plants just to keep it as an extra special weed!