Whilst investigating the cellular structure of Lady Orchid albino variants some additional images of the lip structure and the presence of calcium oxalate crystals were obtained. These are shown in this supplementary article. 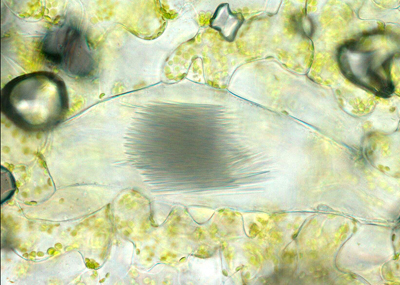 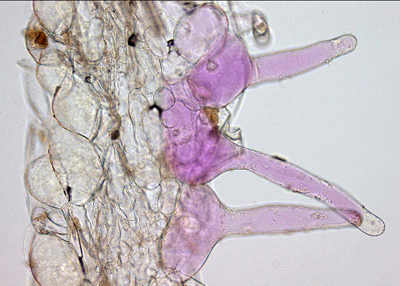 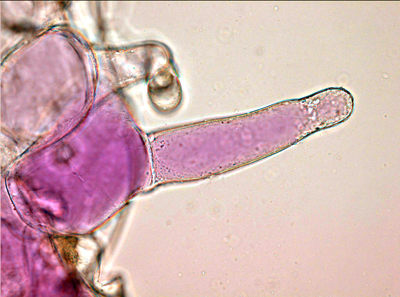 The microscopic investigation of albino Lady Orchids described in the article “Pale Ladies – part 2” generated a few extra images of interest. One revealed cells that contain crystals of calcium oxalate (photo top left). Many different plant species have been shown to generate calcium oxalate crystals, although their structure does vary. Those observed in flower cells of the Lady Orchid consist of sharp ended needles that have been named “raphides”.

One explanation for the presence of calcium oxalate in plants is that they act as a reservoir of calcium, storing and contributing to the control of levels of that important element. Another established role is that the calcium oxalate crystals act to deter herbivores and that case has been made for mammals, insects and molluscs.

I find it interesting that these crystals are found in flower tissue. One might not consider that to be a likely place to create a major component of metabolic control whereas a deterrent to herbivores in flowers would seem to be especially worthwhile.

During 2010, I undertook a pilot study of herbivore impact on the Early Purple Orchids in my local area of ancient woodland and found that the flowers of this species were not eaten by deer even though the pre-flowering vegetative rosettes and flower buds were subject to massive damage. One explanation that I considered was that the characteristic odour of Early Purple Orchid flowers may make them unpalatable. If, like the Lady Orchid, they also contain calcium oxalate crystals then that may well be another reason they are not consumed by deer.

The other two images here (bottom two photos left) show the anthocyanin-containing cells that account for the characteristic red flecks present on the lip of the Lady Orchid.


Thanks to Mary Parker for help with microscopy studies of the Lady Orchid.
Next
Previous