In order to further investigate the basis of this variation, I have examined the ultrastructure of individual flowers representative of the normal purple-hooded Lady Orchid and both green-hooded and straw-hooded albinos. This shows that both albino forms derive their green/straw colour from intracellular chloroplasts located in the hood tissue. It provides an interesting indication of the fact that in orchids three of the six flower components are derived from what would be chloroplast-containing sepals in non-orchidaceous flowers. There is no evidence that the straw colour is due to an additional intracellular pigment, although the source of the purple colour in the normal flowers is clearly associated with the presence of anthocyanin in the outermost layer of cells. Whilst not definitive, there is a suggestion that the straw-hooded flowers have a rougher surface with substantial amounts of amber-coloured and crystalline extracellular material. It is conceivable that this filters and distorts the green colour originating from the internal chloroplasts and accounts for the yellow hue in these flowers.

The above photographs illustrate differences between the normal coloured Lady Orchid (left), the green-hooded albino form (middle) and the straw-hooded albino form (right). The top panel shows close ups of the hoods in these three types of Lady Orchid and the lower panel provides a surface view of the cells by light microscopy. Sections through the hood tissue are illustrated in the following three images, also using light microscopy. 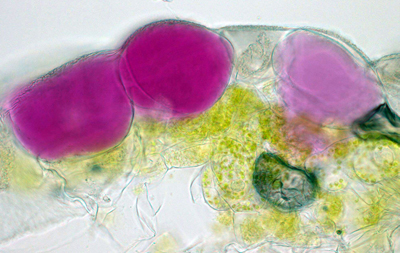 Section through the hood of a normal Lady Orchid showing the presence of both anthocyanin pigment and chloroplasts. 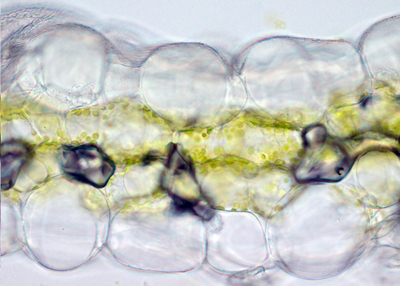 Section through the hood of a "green" albino Lady Orchid showing the presence of chloroplasts but no anthocyanin pigment. 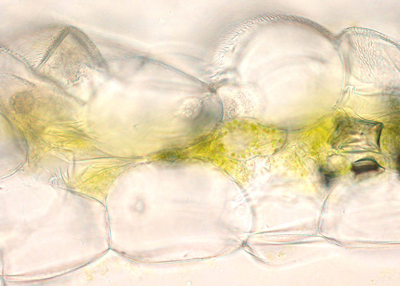 Section through the hood of a "straw" albino Lady Orchid showing the presence of chloroplasts but no anthocyanin pigment.

It is interesting that other species of anthropomorphic Orchis can generate albino variants but in both the Military Orchid (Orchis militaris) and the Monkey Orchid (Orchis simia) the entire flower, including its hood, becomes white. The generation of pure white flowers in the albino variants of Orchis militaris and Orchis simia presumably reflects the fact that the wild type flower components that form the hood (derived from sepals) have evolved to lose their chloroplasts. One might speculate that, together with the anthocyanin pigment, the retention of these chloroplasts in the Lady Orchid may contribute to the characteristically darker purple hood colour of its normal form. That same deep colour is also characteristic of the hoods of the diminutive Burnt Orchid (Neotinea ustulata) that until recently was included within the genus Orchis. I find it interesting that this species also generates albino forms and these can be either green-hooded or straw-hooded, just as is found in the Lady Orchid. Lastly, in thinking about the flowers of the Orchis species, it is intriguing that the Man Orchid (Orchis anthropophorum) retains a green hood and lacks a coloured pigment. One might presume this to be a more primitive condition with the flower components of the hood bearing a closer resemblence to the sepals of non-orchid species of flowering plant. This distinction is of interest from a taxonomic viewpoint as the Man Orchid was placed in a separate genus (Aceras) until the results of DNA analysis revealed its relationship with other Orchis species.

Thanks to Mary Parker for help with microscopy studies of the Lady Orchid.
Articles
PreviousNext