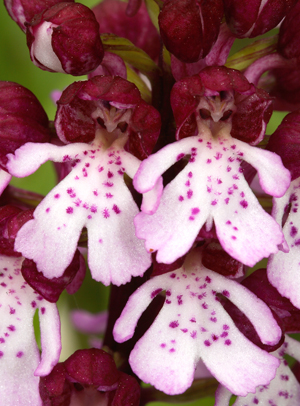 I have a particular affection for the anthropomorphic Orchis species and one of my most memorable orchid field trips was to a well known site for the Lady Orchid (Orchis purpurea) in Kent. This was way back in 1980 and involved an overnight drive from Berkshire and a brief wait for first light. I was rewarded with an unexpected encounter with a family of badgers and when dawn gave way to a sunny morning a quite spectacular display of Lady Orchids. This was my first encounter with this species and I was impressed both by their large numbers and by the variation within this well-established population. 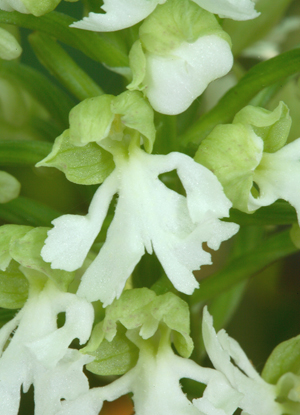 One of the highlights was finding an albino with an unmarked lip and pure green hood. This plant was reasonably isolated but it was near to another of similar form with unmarked white lip and distinctively mottled green and purple hood. Rather fancifully, I like to think of it as an intermediate form – something of a half way house between the albino and fully coloured plants. These two Lady Orchids were present when I visited the site in 1980 and 1982, although they were both absent in 1981. More recently I have encountered the green hooded albino form at other sites (photo right), one of which reliably includes several amongst what is probably the largest extant population of Lady Orchids in the UK. 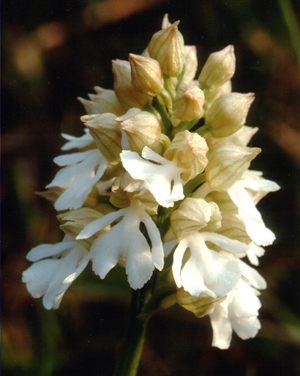 As well as fuelling a general interest in this and the related anthropomorphic Orchis species, I have retained a particular interest in these aberrant colour forms. The eminent botanist Francis Rose published a seminal study of Kentish Orchis purpurea in which he describes albino Lady Orchids as having “pure white lips and straw coloured hoods” (Rose 1949). The “straw coloured” description is repeated in the classic New Naturalist book by V. S. Summerhayes (1951) and in Lang (1980) but to my eye the albino flowers that I first observed in 1980 were very definitely green hooded without the hint of yellow implied by “straw “ as a descriptor. This is true for the albino Orchis purpurea in the “Illustrations book by Derek Turner Ettlinger (1998). The latter author’s “Notes” companion (Turner Ettlinger 1997) also describes the albino Lady Orchid as lacking anthocyanin with a pure white lip and white hood veined green. 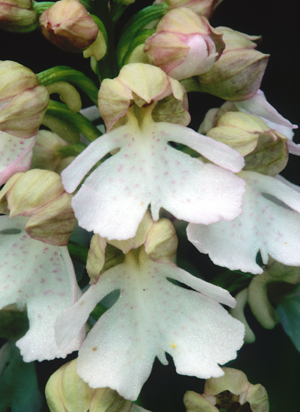 Having pondered on this subtlety of hood colour, I was delighted to find genuinely straw hooded Lady Orchids during a trip France in 2004 (photo above). The country is an absolute joy for orchid enthusiasts with many species growing on roadside verges and it was in such a location that I found a small colony with three distinctly straw hooded albinos. The other plants in this colony were strongly coloured with typical anthocyanin-containing purple hoods and “flecked” lips, making the albino form a very obvious colour break. The straw versus green distinction is reinforced by the inclusion of a clearly straw hooded Lady Orchid in the SFO atlas of Haut-Normandie (Demares 1997). 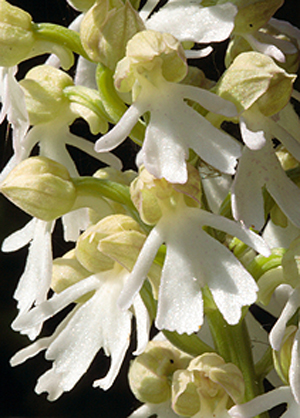 More recently, I came across further examples during a visit to another well known Orchis purpurea population in Kent. In contrast to the French straw-hooded Lady Orchid, the flowers on these plants do have very feint flecks on their lips. Of two examples shown in the accompanying photographs, one has a distinct hint of anthocyanin in its straw-coloured hood (photo above)and the other has an almost lemon-coloured hood with barely visible lip marking (photo left).

The question in all of this is whether what seem like different albino forms are genetically distinct or simply an example of environmentally induced variation. It is likely that over time independent mutations that interrupt the biosynthesis of anthocyanin pigments occur in the Lady Orchid. In this case it might not be surprising for distinct mutations or genetic backgrounds to cause subtle differences in the appearance of albino plants.


Go to Part 2 of Pale Ladies