This small report of an exploration of roadside nature reserves in Suffolk was publshed in the July 2006 issue of Journal of the Hardy Orchid Society. As well as highlighting the value of these small reserves for the orchid flora, it includes a record of an unsual variant of the Bee Orchid Ophrys apifera.
One of the pleasures of orchid hunting in France is the ease with which interesting plants can be spotted in the grass verges whilst driving along characteristically quiet and straight rural roads. Also, here in the UK there are some interesting sites on our own roadside verges. During the 2005 and 2006 orchid seasons I took an interest in the "Roadside Nature Reserves" that are managed by the Suffolk Wildlife Trust and Suffolk County Council. My interest was first aroused by reading Martin Sandford’s useful county orchid flora “The Orchids of Suffolk” (Sandford 1991). This highlights important roadside records for the Bee Orchid variants Ophrys apifera var. chlorantha and Ophrys apifera var. trolii, as well as the fact that protected roadside verges represent the stronghold for the Man Orchid, which is quite rare in the county.

In addition to using hints from Martin Sandford’s book, I contacted Suffolk County Council who proved extremely helpful. I was surprised to find that they maintain an ecologist on staff and it was easy to obtain an Excel spreadsheet with a complete record of the Suffolk Roadside Nature Reserves. This provided precise grid references and details of recent surveys of the sites. In practice these sites are very well identified with white marker posts at each end of the protected areas. The key conservation step is to prevent verge mowing from destroying the flora and the protected areas are easy to spot due to there relatively lush vegetation. I managed to track down several sites that seemed to promise orchid interest. Of five Roadside Reserves with Man Orchid records I found Orchis anthropophorum at three of them. 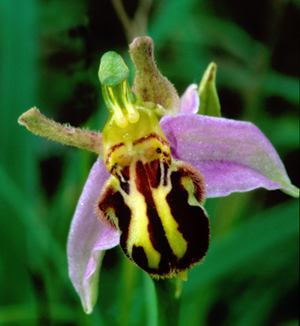 Bee Orchids proved to be somewhat disappointing with several blanks. I had the feeling that in some cases the rich vegetation may have been counterproductive for this species. Indeed, at one site Ophrys apifera was present on a wide verge that had been cleared to provide better vision for motorists. Here, Bee Orchids grew in profusion on what was very largely bare earth. The site was notable for the presence of a plant with unusually marked flowers in which the normal lip pattern was reduced to a pair of vertical yellow stripes. There is a rather similar flower illustrated on page 194 of “Illustrations of British and Irish Orchids” (Turner Ettlinger 1998) and identified only as “an aberrant lip pattern.”

Another interesting Roadside Nature Reserve is noted for a Wasp Orchid record, first made in 1990. This site was curious as the protected verge supported a lonely Pyramidal Orchid, whereas on the opposite unprotected side several Bee Orchids were flourishing almost within a field of rape. When I visited in 2005 one plant carried a mix of normal flowers at the base of the spike and apparent Wasp Orchid variants towards the top, a phenomenon described by Summerhayes (1986). As well as the Orchis species mentioned above, Pyramidal Orchids are present in sufficient numbers to give a purple tinge to some areas later in the season.

East Anglian Roadside Nature reserves were pioneered in Suffolk but they are found in many other counties. At one site in my local Norfolk, Early Purple Orchids grow alongside an area of woodland and similar schemes elsewhere in the country may offer orchid interest.